Using what you got

Looked in the fridge today and in the back of the veggie draw was a sad looking zucchini. So I decided to make my choc zucchini brownies. Always a great way to use up zucchini.
Just got it out of the oven and it smells good. I will let them cool and slice them in half again and take some to the boys for afternoon tea.
Don't you wish you worked for me!
See ya 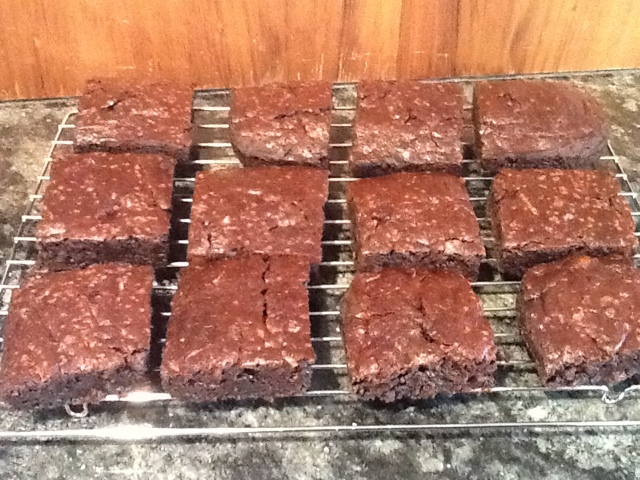 Yesterday hubby took me out and we drove to sorrento were we boarded the ferry across to queens cliff. In the first pic you can see the top deck. It was a beautiful sunny day and once the ferry got going the breeze was very nice.
The second photo shows the other ferry coming back from queens cliff and they do this every hour on the hour. A fantastic way to miss having to drive through the city.
The nest pic shows the spirit of Tasmania going back to tassie another great way to travel. I've been to tassie twice on the boat and loved it!
When we got to queens cliff we had lunch at the fish and chippery, then took the elevator to the top of an observation tower. The photo of the marina is taken from the top.
Hubby then decided we would drive home the long way and enjoyed our time together in the car.
My sister in law rang as we got home and invited us to her place for a swim and dinner so we ended up going out again. The swim was wonderful and our dinner was what we had taken out for tea, what she had decided to make for tea and some salad and baked potatoes. Best meals are those thrown together.
So today I am totally exhausted, but I don't care. It was a great day. And day spent on and in water is always a winner in my books.
See ya 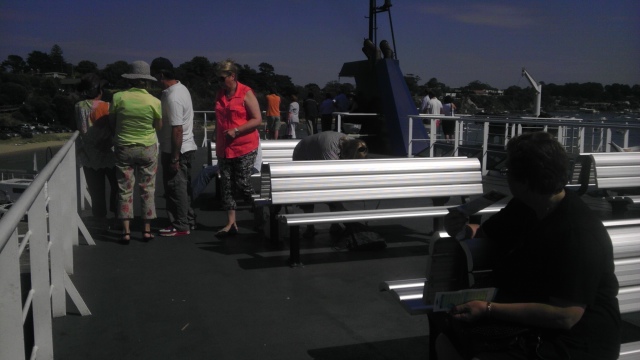 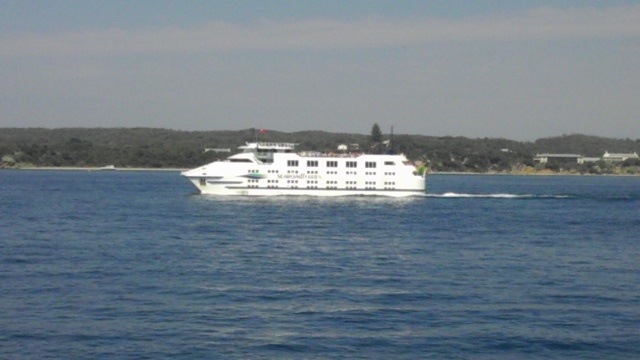 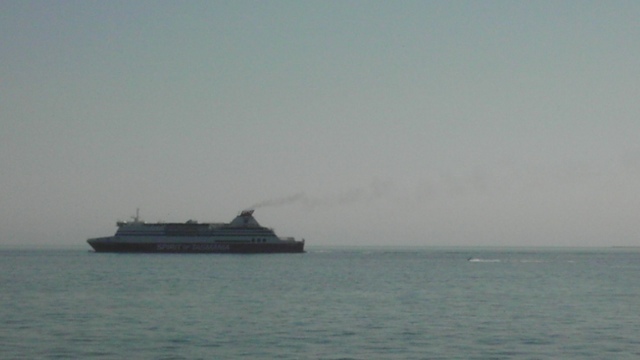 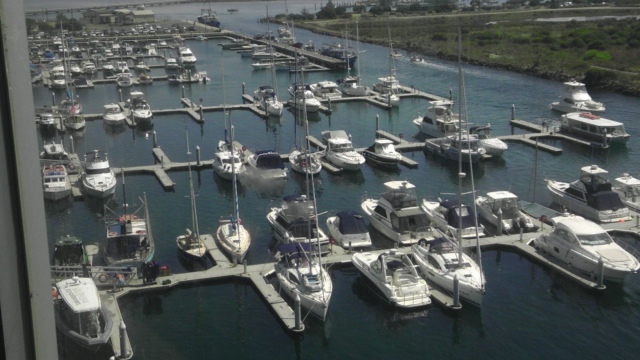 What's a mama to do

My poor baby boy (who turns 24 in four months) was not feeling well yesterday. His father tried to sen him home but he stayed till the end of the day. So because he loves banana bread I made him some.
He was too ill to eat it, but I'm sure it will get eaten today, besides the other boys in the workshop love my cooking too!
And while I was cracking my home grown eggs I found another double yolker! one of my chickens is regularly laying them.
With all the cooking I did yesterday I feel worn out today. But it was good to be able to make yummy food for my boys to eat.
See ya 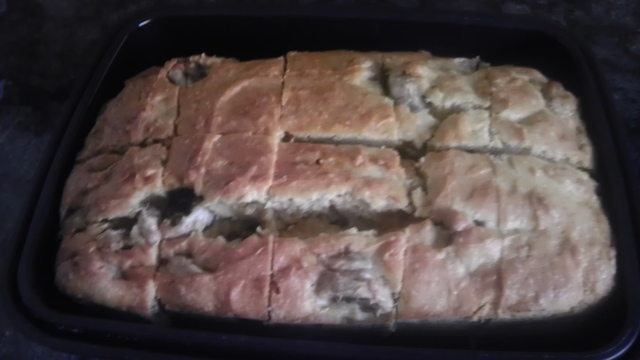 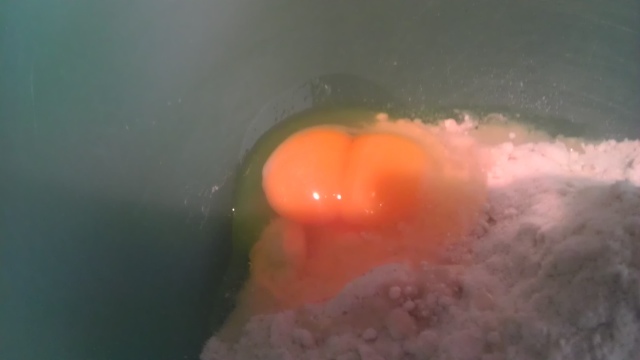 Over the weekend we harvested from our garden. It's starting to wind down for the summer, hasn't been a real success but it's been hot and dry and I haven't had the energy to look after it properly as I normally do.
Luckily for me my sister in laws mum gave me some of her harvest.
So today I am busy cooking up!
In the first photo is one of our onions, it's about the average for this years crop. That's a roll on deodorant bottle next to it!
I have egg and bacon pie in the oven using our home grown eggs, and the last of the beet root. I think I'll make some garlic mashed potato to serve with it!
And some ratatouille cooking on the stove. Well eat some today and I'll freeze the rest for later.
So all in all not a bad harvest
See ya 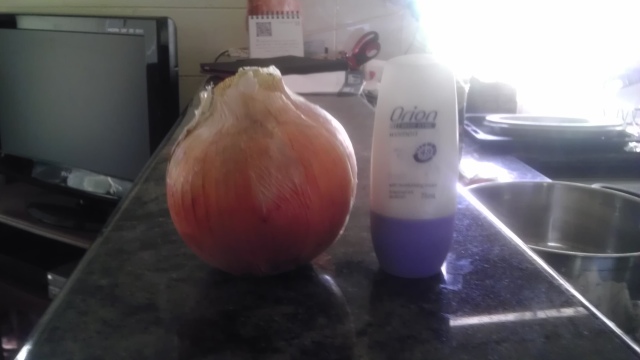 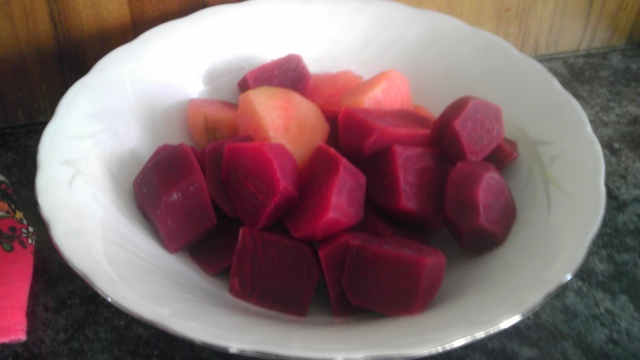 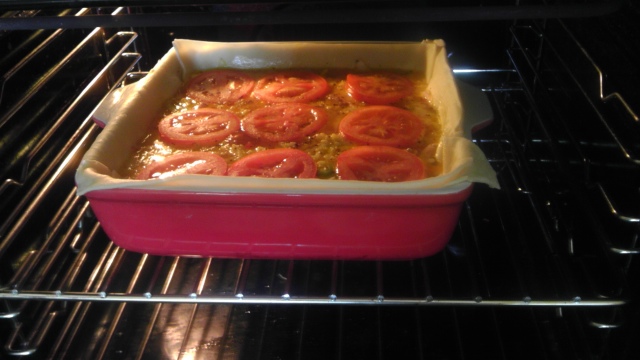 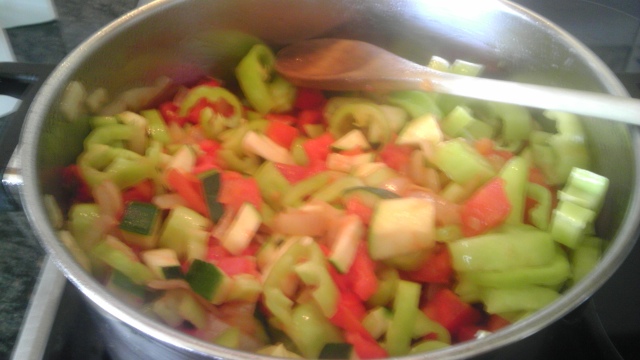 Today I had a request from the boys for pita so since I had the cheese in the fridge and the chickens are laying so well I made my three cheese and egg mix for two pita's.
One has already gone, and I'm sure the next one will be gone by tomorrow. I love cooking when everyone eats. I guess its the wog in me hahah.
I wonder what I can bake tomorrow?
See ya 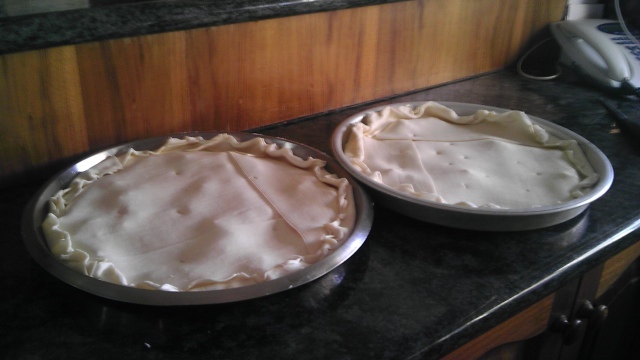 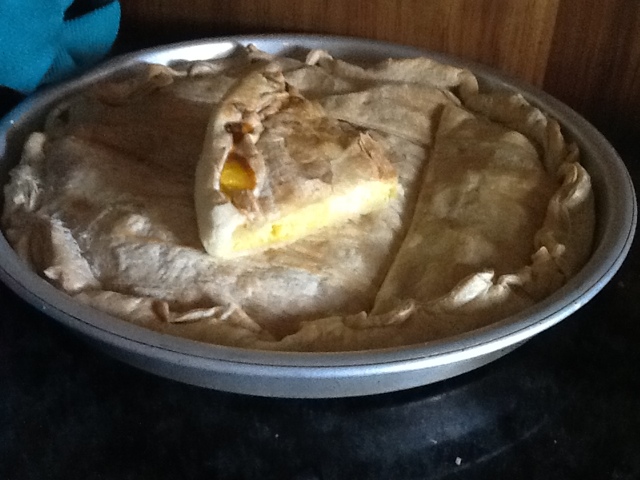 As you know I lost my beautiful cat Sebastian a little while ago, and i did not know if I was going to get another cat. But after a couple of weeks I could not stay at home alone. It was just not home without a cat. So I did a search on the net and did the what kind of cat suits you test and decided I wanted a british short hair. I had seen them on the tv and improved the blue. Now that hard part. I rang breeder after breeder and only one answered her phone, that one had a kitten that was available right now if I wanted her.
I was told she was timid and that she could not go to a home with small children. That was ok with me, so I went to see her and spent over an hour with her trying to decide weather or not we could become family.
I was not sure as she did not seem to like me, but I kept trying to play with her. The other cats kept getting in the was and I suspect she was bullied by them s little.
But the breeder really wanted me to have her as she said I looked like I had the the makings of a great pet owner! She said take her home, give her a week and if you haven't bonded bring her back. So I did and about 12 hours later we were best friends as you can see from the last photo.
I'd like to say thank you to mandaburns for the blog award, and now I have fulfilled the requirement of photos of my kitty!
Have a great day everyone,
See ya 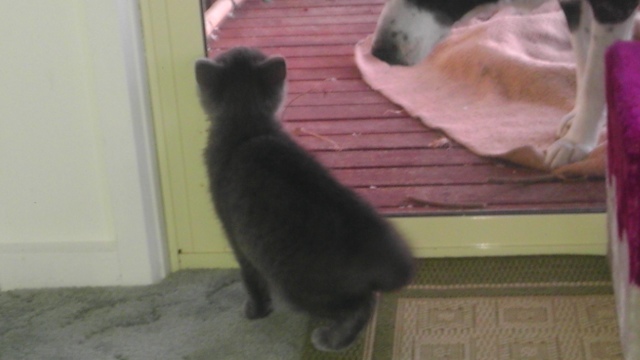 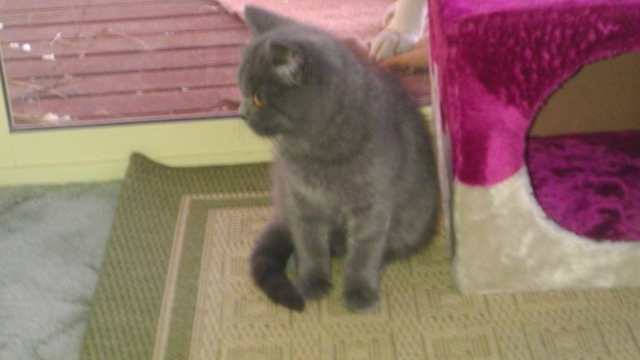 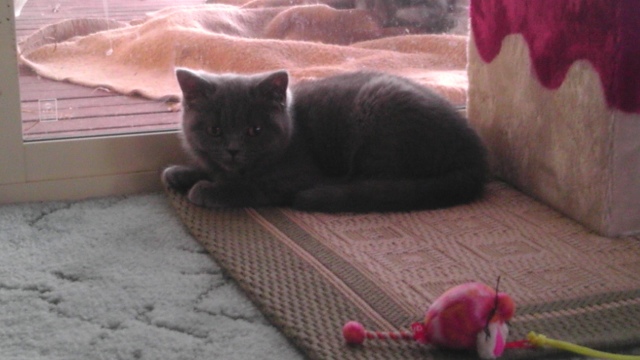 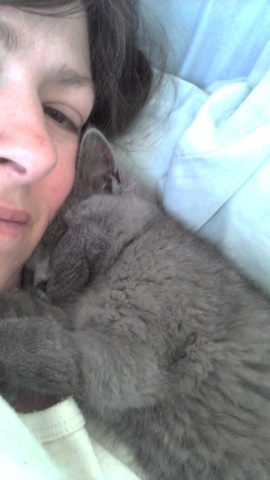 I took a nostalgic walk through my old earthmama blog and remembered the days when I was productive and busy and happy. I miss the days spent outside puttering in the garden growing lots of food and preserving my harvest to be consumed during the cold days of winter. I miss starting new projects weather they be quilts or knitting or crochet.
I miss working outside the home and going to the gym. Although I never though I would miss that!
But most of all I miss the old me, the one that would try to learn something and do it saying to myself how hard could it be.
Now the how hard could it be comes from my health, this disease that has taken my old life and left me with this.
I am angry and sad. I know I am better off than a lot of people suffering CFS I am grateful that I am able to still do all I can. But today I am having a pity party and I just don't know how to stop.
I have been out today and taken hubby to collect a car from dandenong but I was planing to go do a shop. But that now has to wait till tomorrow as the little energy I had has been used up.
This is me now, only so many spoons and I have to be careful how I use them.
See ya
Posted by angela at 1:29 PM 7 comments:

Today we decided to go for a drive and see the sights. You know like you do when you go away. There is usually do many thing to see and do near home but we never go because we aren't on holidays.
So today we jumped into the car and drove off. No plans just go with the flow. We arrived in jindivick and had an early lunch at a little restaurant that cooks with food it grows on it grounds or sources from the local area. It was yummy and I had an ice tea with oranges in it!
We then keeps going and a couple of towns father on we passed a trout farm so we stopped and decided to try our luck!
It really was as easy as bait your hook, place it into the dam and pull it up. Thats how quick the trout hit. In a few minutes we had caught two each and decided to try and catch a salmon. Unfortunately they were not as easy to catch. There was one guy who said he had been trying for a while and he had only seen one guy hook one buy he lost it as he was about to land it. So we decided to catch a few more trout and just buy the salmon at the shop.
Well we took our six fish and they cleaned it for us, we also got a trout that was already smoked, didn't feel like salmon anyway. And headed home. We are now smoking our fish as we speak. I will post a photo for you in the next post.
Looking forward on trying them.
See ya 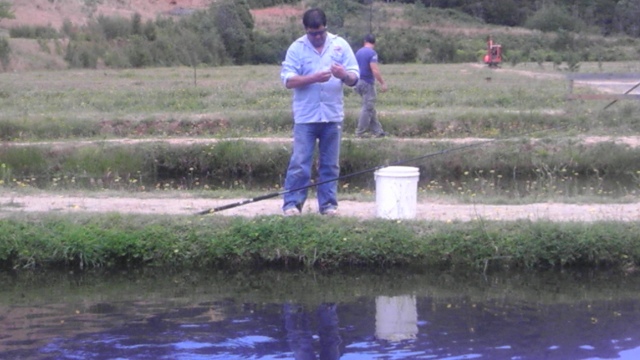 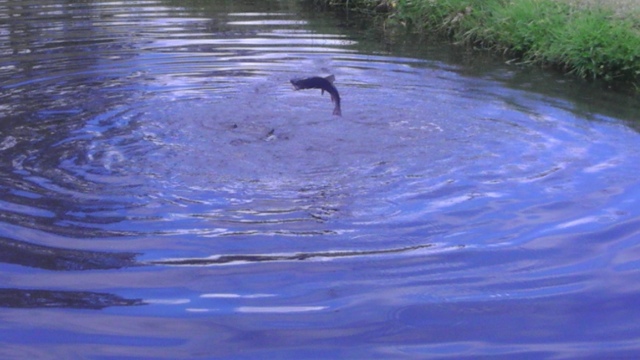 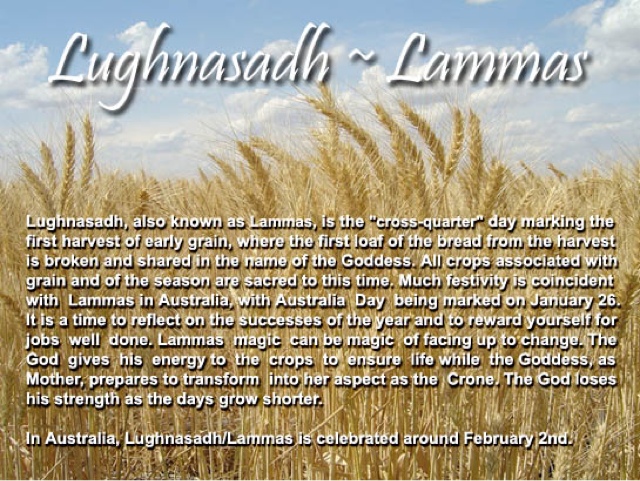